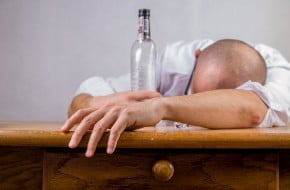 Alcohol is one of the most dangerous killers in the UK. In 2014, more than 8500 deaths in the United Kingdom were alcohol related according to government statistics. It is a worrying statistic as alcohol is a highly addictive substance.  Nearly half a million people in the UK are alcohol dependent and the health issues alcoholism brings are certainly not something to take lightly, as the death toll in 2014 proves.

We think it is imperative to contain the steady growth of severe alcoholism, and knowing when and why one needs to stop drinking. In healthy doses, alcohol can be enjoyed. However, if you feel like your alcohol intake has passed that stage, we’re happy you decided to visit our site. We will be explaining what alcoholism is, whether you could be an alcoholic and how to get help. The symptoms of alcoholism are not always very clear, but there are ways to prevent alcoholism.

Alcoholism is considered to be a physical and mental health issue by medical professional standards.  An addiction to alcohol occurs when an individual becomes physically dependent on alcohol. When the individual ceases to drink alcohol for several hours, physical and psychological withdrawal symptoms will begin to appear.

The questionnaire asks the following questions:

If you have answered yes to two of these, you might be suffering from alcoholism yourself.

The symptoms of alcoholism.

As already stated earlier, many deaths have been caused by alcoholism. It is a process that gradually gets more and more serious. The early symptoms of alcoholism are difficult to spot however.

How it starts off;

As many Brits do in their spare time, social drinking is a part of the culture. Most people stay sensible, but everybody has had a night where they had a few too many drinks and ended up inebriated by accident.

One might assume that binge drinking occasionally can do no harm. That statement is absolutely false. When you drink too much, you can fall into a coma or even worse, lead to death.

In some cases, one might like the feeling of inebriation, and will keep chasing that feeling, which could lead to an increase of binge drinking sessions. At some point, this could become a requirement rather than something one would do for fun.

The psychological symptoms and effects of alcoholism.

Once you become dependent on alcohol, you will see a rapid change in your mood and mental state of mind. Both when you have been drinking, and when you’re sober.

There are a few reasons for this, as there already may be underlying causes for your alcohol abuse and dependence. A lot of people who have been suffering with anxiety and depression self-medicate with alcohol, which could cause a vicious cycle to happen. Drinking alcohol might help someone with depression or anxiety in the short term, but binge drinking will lower the serotonin levels in your brain after a few hours, which regulates the feeling of happiness in your brain. You would feel even worse the next day, and it would push you to drink more, which in turn would exacerbate your mental health issue.

After a severe bout of alcoholism, you might experience some serious brain damage. The first one and most occurring brain damage symptom of alcoholism is the blackout. You might start having gaps in your memory or you wake up some place you never been before, and you have no idea how you got there.

A very serious complication from alcoholism is Korsakoff-syndrome. Essentially, this is long term blackouts and early dementia. You might lose memory rapidly and you’ll be unable to process new information.

The physical symptoms and effects of alcoholism.

Many physical symptoms of alcoholism have been well known and documented. The liver is the organ that takes the biggest share of the damage, as your livers produces the enzymes that break down the working component in alcohol – ethanol. After a while, your liver cells will die off, and so will your liver. Many diseases like cirrhosis, where your liver is significantly scarred, is a stern warning to drink less. If you keep drinking with cirrhosis, there is a 50% chance one will die in the coming years.

Other illnesses from alcoholism are myopathy, where your muscles become weaker over time, or gastritis, where your oesophagus will struggle to contain food.

How to quit before or after the symptoms of alcoholism show up.

Many people have had an issue with alcohol and they managed to quit drinking; so can you! Before it becomes a major issue, we advise you to quit drinking as soon as possible. With Rehab 4 Addiction, we can help you find the perfect place to get rid of this horrible addiction.

A rehab centre will have a setup in place to help you detox, which is cleansing your body from alcohol. After detox sessions, there are opportunities to speak to therapists who can help you identify when your cravings for alcohol start, and how to prevent getting in these situations.