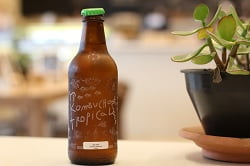 Kombucha tea is a sweet, slightly acidic beverage that is becoming increasingly popular among the health community today.

However, the beverage has been around for centuries with its origins traced back to China.

Today, Kombucha is marketed for its medicinal properties.

There is a link between Kombucha tea and a variety of health benefits.

However, there are concerns about Kombucha tea’s alleged alcohol content.

Here’s a detailed discussion on whether the tea contains alcohol.

How is Kombucha tea made?

The “key” to ascertaining whether Kombucha tea contains alcohol or not lies in how it is made. Kombucha tea is made through fermentation. The beverage is made by adding yeast, sugar, and specific strains of bacteria to green or black tea. The mixture is then let to ferment for some time (a few weeks) at room temperature.

The fermentation process makes the yeast and bacteria in the mixture to form a “mushroom-like” film on the surface. The process gives the tea its signature characteristics since it adds alcohol, carbon dioxide, acetic acid, probiotic bacteria, among other compounds.

Fermentation breaks down sugars into carbon dioxide and alcohol. Therefore, we can conclude that the tea contains some alcohol. The alcohol content is, however small, sometimes insignificant to the extent of being labeled non-alcoholic.

The alcohol content of the tea is below 0.5%, which is below the current United States Alcohol & Tobacco Tax Trade Bureau regulations for beverages to qualify as alcoholic. However, it’s worth noting that homebrewed Kombucha tea can have a higher alcohol content (up to 3% or more).

In a nutshell, you should be more concerned about Kombucha alcohol content when the tea is made at home. Commercial Kombucha tea doesn’t contain enough alcohol to qualify as alcoholic.

However, this doesn’t mean that everyone can take Kombucha tea. Pregnant and breastfeeding women shouldn’t take homebrewed Kombucha tea since it can contain harmful levels of alcohol. Furthermore, such tea is unpasteurized, which may increase the risks of suffering from a miscarriage.

It is advisable for pregnant women to avoid anything that contains alcohol throughout their pregnancy. Breastfeeding mothers should avoid anything with alcohol since alcohol passes through breast milk.

Besides containing alcohol, Kombucha tea has some other properties which pose certain risks.

Homebrewed Kombucha poses serious health risks more than commercial varieties. The reasons behind this are simple – home brewing increases chances of contamination, which can cause serious disease and even death in severe contamination cases.

If you choose to make Kombucha tea yourself, you must prepare it properly, otherwise, consider buying commercial varieties instead. Such varieties are pasteurized and made in highly regulated environments by professionals who know the exact contents of the final tea.

Although Kombucha tea has some downsides, especially when it is prepared at home, it is also associated with some notable health benefits. Some of the Kombucha tea benefits you stand to enjoy include:

Kombucha tea has benefits that are backed by science. The tea has probiotics, can help to manage blood sugar, is good for the heart, and it is capable of fighting cancer. The tea is also good for your liver.

However, the tea offers these benefits when it is manufactured properly. Kombucha tea should be pasteurized to kill any bacteria. It should also contain a small amount of alcohol (less than 0.5%). The presence of bacteria and alcohol in homebrewed Kombucha teas can’t be controlled. These concerns are addressed by commercial varieties.

However, commercial varieties aren’t universally safe and beneficial. Pregnant or breastfeeding mothers should stay away from the tea for reasons discussed above. The same applies to alcohol addicts.

Tim has written about recovery and addiction for well over a decade. He is currently writing a book about exercise and recovery. In his spare time, he enjoys reading, cookie and spending time with his wife, children and three dogs.