Learn more about overcoming alcoholism denial to begin the rehab process. Denial is one of the hardest obstacles to overcome but must be addressed to begin the healing process.

Alcoholism comes with many obstacles that make it difficult for an individual to get sober. And one of the toughest obstacles is denial.

While, to outsiders, there is an obvious link between a person’s drinking habits and the problems that the person is facing, it may not be so obvious to the person.

And, unfortunately, the loved ones of an individual suffering from alcoholism might also develop this denial, not wanting to admit that their friend or a family member has a problem with alcoholism.

Denial is, undoubtedly, a difficult obstacle to overcome. Just how difficult it depends on the person. Some may be able and willing to acknowledge the truth sooner than others.

In any case, it is no easy feat, but it is necessary. In order to recover, a person who is alcohol dependent must first admit to themselves that they have a problem and that they need help.

Why do dependents experience denial?

Below are a few main reasons that someone suffering from alcoholism may be experiencing denial. Reasons that could combine or overlap, depending on the person.

One aspect is that there is undoubtedly a negative stigma against alcoholism.

People often fear judgment, and when those who deal with alcoholism see how other individuals who are dealing with alcoholism are viewed, they do not want to associate themselves with that stigma.

They may fear being looked down at by their peers, or perhaps they’re more afraid of how they’ll view themselves.

2. Admitting a harsh truth about ourselves is not easy

Another reason can stem from the previous one. All of us find it difficult to admit harsh realities, whether in reference to addiction or not.

Admitting that we have a serious flaw or bad habit is not easy for anyone, as it can often be painful or embarrassing, even if it is necessary for beginning a journey of improvement.

And an alcohol problem is, indeed, a harsh truth that people will not want to admit to themselves or to others. Even if they know that they need to admit it in order to recover.

3. Genuine belief that they don’t have a problem

This is a difficult one to overcome, as the person is at a stage in their addiction where they cannot see their habit like an addiction. Perhaps they really don’t think they’re drinking too much.

Or perhaps they know they drink a lot, but they don’t see it as a habit that they have come to rely on. Whatever the case may be, this is a common aspect of denial that is one of the most difficult to overcome.

One of the most common reasons is quite simple, yet it has a big impact. There is something that all of us, to one degree or another, fear. And that is change.

Often times, we have a tendency to cling to things that are familiar, even if those things are causing us problems.

Those who are dealing with an alcohol addiction may not want to admit that they have an addiction because the addiction is familiar, and admitting it is a problem means that change needs to take place.

Behaviours that someone in denial may be exhibiting.

In order to tell if someone is truly in denial, there are some notable behaviours to look out for:

Many times, the person dealing with the addiction is not the only one who will be in denial of their habit.

1. Convincing themselves that their problems are due to something other than alcohol addiction

Attributing an alcohol-dependent individuals negative behaviour to something other than alcohol is a common form of denial in the loved ones of the described individual.

They might claim that their loved one is behaving this way due to stress, depression, trauma, or another mental disorder. While it could very well be the case that the person’s mental health or stressful situation is contributing to their problems, the main culprit should not be ignored.

Their loved ones may be acknowledging an existing issue, but they are not acknowledging the one that needs to be addressed the most.

2. They will try to keep their loved one from facing the full consequences of their actions

While they have no ill intent in doing so, protecting their loved one from facing consequences is a harmful action. It stems partially from love and concern, but it can also stem from denial.

Once again, the people who are doing this have nothing but good intentions, and they might not be able to see that what they are doing causes more harm than good for their loved one. 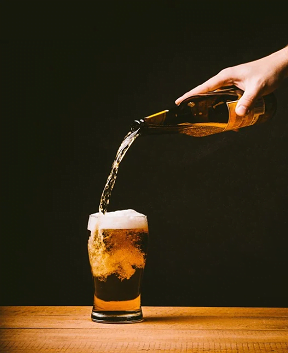 How do you get someone out of denial and help them see the truth?

Confrontation is never easy, especially when you’re confronting a loved one about something that will be hard for them to talk about. Still, it can often provide a push for an alcohol-dependant person that could lead to them finally seeking help.

1. Approach them with kindness and concern

Try not to exhibit any anger or frustration towards your loved one, even if you may be feeling those things.

Approaching them in a way that shows you love and care about them will make opening up easier for them.

2. Ask the individual suffering from alcoholism about their problems

A person in denial will, of course, claim that the problems they’re facing have nothing to do with their drinking habits. So, in a kind manner, ask what is causing their problems.

This will lead to the person having to really take a look at their situation, and their excuses will likely begin to fall apart, as they start to acknowledge the truth.

Instead of arguing, try to agree with them as much as you can. When talking about the problems they’re facing, try agreeing with them about the causes of their issues, and find a way to make them realise that alcohol is another problem of theirs that needs to be addressed.

4. Show them that there’s hope

Tell them about the steps they could take to improve their situation. Ways they could get help and live life normally again. And inform them that the first step on that journey is admitting to themselves that they do, in fact, need help. That they need to seek treatment for the disease they have been dealing with.