A guide to the benefits acupuncture has on addiction recovery and how acupuncture is used in treatment.
Book Now
Home  /  Addiction Treatment  /  Acupuncture for Addiction

Every individual suffering from addiction has different circumstances and different needs, and treatments that work for one addict may not work for another.

Acupuncture is a Chinese healing method that involves inserting thin needles into the skin. It has been used for centuries to promote healing from a wide variety of ailments.

In Eastern medicine, it is said to balance the flow of qi in the body. In scientific terms, we now understand it to stimulate various systems of the body to allow them to function properly.

When inserted, the needles increase blood flow. This releases hormones which in turn can alleviate pain.

A very short history of acupuncture

It is believed that acupuncture originated in China around 6000 BCE. This was before the advent of needles, so sharp stones and bones were used to perform the technique.

In acupuncture theory, there are 12 meridians or channels in the body. These symbolise the main organs and systems of the body. References to these ‘meridians’ were found in the Ma-Wang-Dui tomb in 198 BCE.

Acupuncture rose in popularity during the Ming dynasty in China, which lasted from the 14th to 16th centuries. This culminated in the publication of ‘The Great Compendium of Acupuncture and Moxibustion’.

It then declined in the 17th century, as it began to be viewed as superstitious and unscientific.

Finally, it went through a revival in the 20th century as the Communist government began to give it more publicity. This led the practice to gain popularity in other countries.

How does acupuncture work?

An acupuncture session will normally begin with a consultation period, where the patient will discuss their medical problems with the doctor.

The medical practitioner may apply ointments before starting the acupuncture. There may also be a massage element.

After that, the doctor or medical practitioner will insert needles into various points of the body. These needles are single-use and a few centimetres in length. The needles are then left for around 30 minutes. During this time the patient should feel sensations of calm and relaxation.

More ointment may be applied after the acupuncture, and there may be the second instalment of massage before the end of the session.

Normally acupuncture sessions happen as part of a course, which can last several weeks. A course of acupuncture is generally considered to be more effective than a one-off session.

How is acupuncture used in addiction treatment?

Acupuncture has been used to treat addiction to various substances since the 1970s when it was first introduced as a method for treating addiction in the Lincoln Memorial Hospital in New York.

The doctors at this hospital found it so effective as a treatment for heroin addiction that instead of prescribing methadone they began performing acupuncture instead.

This led to the formation of the National Acupuncture Detoxification Association (NADA) in 1985 by Michael O. Smith, one of the doctors at the Lincoln Memorial Hospital.

The NADA Protocol is a methodology for performing ear acupuncture as part of addiction treatment. It recommends inserting five needles into the ear at specific points. The points are as follows:

When acupuncture is used for addiction, the first step is always to determine whether you have any underlying health conditions that may be causing you pain and prompting you to self-medicate with drugs or alcohol. If any health problems are found, then acupuncture can be targeted to help ease pain in these areas.

Acupuncture is used in addiction because it releases endorphins, which are chemicals that cause pleasure and relaxation in the brain. These endorphins will help those with withdrawal symptoms or cravings to manage these sensations and to continue on their road to recovery.

Furthermore, it is thought that releasing these endorphins may reduce the pleasure or ‘buzz’ gained from any potential relapse, making it more likely that the addict will stay in recovery.

That being said, the scientific evidence for acupuncture is still fairly mixed, and its effects are still not fully understood.

Does acupuncture really help with addiction?

The use of acupuncture in addiction treatment is now widespread and has been accepted by the World Health Organisation.

However, there are still some doubts about its effectiveness. For instance, this study by James B. Jordan found that there was no evidence that acupuncture had any positive impact on addiction.

But this study by K. Montazeri found that acupuncture helped to lessen the withdrawal symptoms associated with Rapid Opiate Detoxification (ROD).

The scientific community hasn’t yet reached a consensus about acupuncture. Some studies show that it has significant benefits, whereas others do not.

What does this mean for addicts? Should acupuncture still be considered a viable treatment option?

Arguably, yes, but alongside other tried and tested treatments, such as therapy and detoxing. Acupuncture should not be recommended as a treatment on its own but can be effective for some people when used in conjunction with other treatments.

The good thing about acupuncture is that it doesn’t really have any drawbacks. It is cheap and safe, and even if it doesn’t work for one individual then they can always pursue other forms of treatment.

It also has a massive upside, since it has the potential to really make a difference to someone, especially if they are experiencing severe withdrawal symptoms or pain.

In the next section, we look at some of the many benefits that acupuncture can offer. 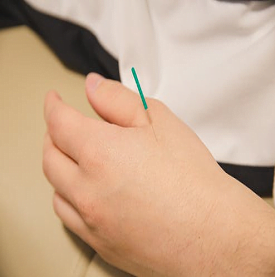 Benefits of acupuncture as a treatment for addiction

When combined with other treatments, acupuncture can offer many benefits to those who are willing to take the plunge.

Not only does it soothe anxiety, but it also does many other things too. It’s important to remember that it does so without any sort of chemicals or medication involved.

This is a considerable strength of acupuncture since medication always carries the risk of side-effects or adverse reactions on the behalf of the person taking the medication.

Here are some of the positive impacts that acupuncture can provide:

When one considers that all of these advantages can be obtained without drugs or medication, the slight risk that acupuncture may not work for every addict seems insignificant.

Alternatives to using needles in acupuncture

Some addicts, or recovering addicts, may understandably not want to use needles in their addiction treatment. There are other alternatives to needles, which we’ll take a quick look at in this section.

In traditional Chinese medicine, Vaccaria seeds were sometimes used instead of needles. These seeds, which come from the Vaccaria plant, were placed on the ear and massaged in order to generate the same effects as needles.

Nowadays, metal or ceramic beads can be used instead of Vaccaria seeds for the same purpose.

The beads or seeds need to be massaged several times a day for a few minutes at the five points on the ear where needles are inserted during traditional acupuncture.

One thing to watch out for when using seeds is that they can cause irritation. This may be a sign of allergy, and if you become aware of any redness then you should stop using the seeds immediately.

Finally, magnetic beads can also be used to massage the points, although this is a relatively new phenomenon.

Where can you get acupuncture treatment for addiction?

Acupuncture may not be offered in all treatment centres since it is an alternative form of treatment. It is generally offered at holistic recovery centres where the focus is on repairing the mind, body and spirit through slightly more alternative methods.

Acupuncture may not be 100% effective for every individual suffering from addiciton, but it certainly has its benefits. Given the low risk of trying it, there is certainly some merit in receiving acupuncture alongside a detox, counselling and therapy.

A: No, not really. There may be a slight sting when the needles are inserted but this goes away pretty quickly.

Q: How long does acupuncture take?

A: Typically, a session lasts between thirty and forty minutes. Most of this time will be spent relaxing, letting the needles do their work. Acupuncture should be a very calming experience; it shouldn’t be a source of stress.

Q: How many treatments are necessary?

A: This really depends on the extent of your addiction and withdrawal symptoms. Acupuncture can be done two to three times a week if needed, and a course of between six and ten treatments can be very effective.