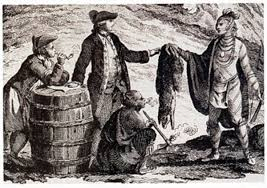 Native Americans living in Alaska are least likely to die as a direct or indirect result of their alcohol intake.

The male population are the highest at-risk group when it comes to alcohol-related deaths.

One study analysed death certificates over a four-year period. This analysis revealed that Native Americans are four times more likely to die from alcohol-related illnesses or accidents compared to the general population across North America. This included road accidents caused by alcohol consumption and alcohol-inflicted illnesses such as liver disease.

Before Europeans reached North America, it’s believed alcohol production was limited to the Southwestern region of the United States. During this period, Native Americans predominately produced alcohol for ceremonial purposes. Most of these beverages contained low amounts of alcohol (between 8-14%).

Native Americans living in North America were unable to produce stronger alcohol concentrations during this period simply because advanced distillation techniques had not yet been discovered. This contrasted with Mexican Native Americans who were able to distil alcohol at over forty per cent from pineapple, honey or wild plum.

Europeans had developed advanced distilling techniques during the centuries prior to colonialisation of North America. These alcohol-distilling techniques were developed over a long period of time, thus giving European populations the ability to develop legal, moral and social guidelines to moderate their use of this powerful drug.

When Europeans colonialised North America, vast quantities of strong alcoholic beverages became available to Native Americans without giving them an opportunity to develop social and moral guidelines to moderate their use.

Europeans utilised potent spirits and wines as a means of trading with Native Americans. Distilled spirits were exchanged for animal skins and other precious resources. This created much demand for potent alcoholic-beverages amongst Native American tribes.

This trend continued as land was colonised from East to West. Miners, trappers and lumbermen all utilised alcohol as a means of weakening Native Americans ability to resist efforts to either steal or profit from their lands.

It’s thus arguable that these historical factors could be a chief cause of the present-day problems Native Americans experience with alcohol abuse.

It’s believed drinking patterns amongst Native Americans grew exponentially over the following centuries of colonisation. Since 1975, alcohol consumption has remained constant amongst the Native American population.

The influence of central American Indians

Knowledge of these techniques reached North America via Mexico. Alcohol was distilled from wild plants by Native Americans before European contact.

However, alcohol was utilised for spiritual rituals and not for drunkenness.

The idea of using alcohol for excessive drunkenness was unarguably a European invention.

Studies have proven Native Americans are not genetically more susceptible to alcohol abuse, thus dispelling the beliefs that underpin the Firewater myth.

The causes of alcohol abuse amongst Native Americans

Now that we have dispelled the Firewater myth, we shall now discuss factors that are likely to contribute towards the risks of alcohol abuse amongst Native Americans.

The greater risks of developing alcoholism amongst Native American peoples is probably due to the multi-generational experience of trauma.

The link between addiction and trauma is well established. Simply put, the more trauma you experience, the greater your risks of developing an addiction.

Stress hormones are known to suppress the immune system and mean Native Americans are much more at risk of developing chronic illnesses such as diabetes, liver disease and obesity. Suicide rates are also high amongst Native Americans.

Native Americans are more at risk of becoming victims of alcoholism and alcohol-related deaths compared to the general population by a factor of 5.6.

Native Americans are 3.9 times more at risk of developing chronic liver disease and cirrhosis due to alcohol consumption compared to the general population.

Alcohol was a factor 69% of suicides amongst Native Americans.

Native American males aged between 45 and 64 are particularly at risk of alcohol-related mortality.

Native Americans are also more at risk of falling victim to domestic violence compared to the general population. This study found that 39 per cent of Native women reported that they were victims of intimate partner violence – a rate higher than any other race or ethnicity surveyed. Domestic violence has a devastating impact on families, individuals and communities. A major risk factor of domestic violence is substance abuse, including alcoholism.

In fact, the prevalence of FAS amongst Native Americans is greater than anywhere else throughout the entire world. Contributory factors include high poverty levels and a lack of healthcare.

Average spending on healthcare amongst Native Americans is just $2,782 compared to an average of $11,762 for those on Medicare.

Efforts to solve these problems

There have been a number of initiatives set up to assist Native Americans who may be negatively impacted by the issues we raise in this article.

Below, we outline a number of these initiatives:

The Indian Health Service set up the Alcohol and Substance Abuse Programme (ASAP). The ASAP assists both Alaska Natives and American Indians who are suffering from substance misuse. The ASAP is administered in tribal communities. Both inpatient and outpatient addiction treatment is made available for those who are covered under the Indian Health Service.

The TAP coordinates resources and funding required to help mitigates levels of alcohol and substance abuse among the Native American population.

If you are affected by any of these issues above, know that seeking out help is unarguably the best move you can make.  Suffering alone will only serve to perpetuate your own or your loved one’s problems with alcohol.

Below, we list a number of useful links to help you connect with services in your area:

Tim has written about recovery and addiction for well over a decade. He is currently writing a book about exercise and recovery. In his spare time, he enjoys reading, cookie and spending time with his wife, children and three dogs.