Being Popular Linked to Addiction

A recent study reveals popularity in early teens increases the likelihood of suffering a drug or alcohol addiction in adulthood. The study, published in Child Development Journal, surveyed and interviewed 184 teens from the age of 13 up to the age of 23 at schools in the south-eastern United States. The study spanned an incredible 10 year period.

What the study tells us

The results of the study make chilling reading for those of you who identified as a ‘rebel without a cause’ in your earlier years. The study reveals yesteryear’s ‘cool kids’ are more likely to develop drug and/or alcohol addiction and struggle with social relationships by the time they are 23 years’ old.

Conducted by Joseph P. Allen, a Professor of Psychology at the University of Virginia, the study also reveals that former ‘cool kids’ are far more likely to engage in criminal activities when compared to their less-cool peers.

Coolness gained in early teens is often a result of what Professor Allen terms ‘’pseudo mature’ behaviour. These behaviours include engaging in romantic relationships, taking on the role of ‘’rebel’, carrying out ‘delinquent activity’ such as damaging property and physical violence, wearing makeup, hanging around older teens and stealing condoms.

This behaviour had ‘diminishing returns’ as the years went by. Behaviour deemed cool at 13 years’ old are not cool at the age of 23. When cool teens continue this behaviour into early adulthood, their peers begin to label their behaviour as uncool and even ‘socially incompetent’.

According to the study ‘coolness’ peaks around the age of 13. By age 15, cool kids’ peers are substantially less impressed with such ‘pseudo mature’ behaviour. By age of 23, these cool kids are often described as ‘socially incompetent.’

The below chart tracks the rise and fall of cool teens who engage in pseudo mature behaviour. 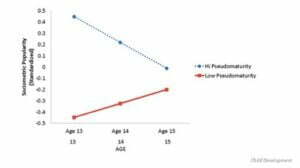 As illustrated by the chart above, by the age of 15 these individuals no longer gain a social advantage by adopting such behaviour. By the age of 23 those previously labelled ‘cool’ are well past their peak of popularity.

Resorting to extreme measures to win back approval

As their coolness fades, these teens often resort to more extreme behaviours in order to win back the spotlight. As Professor Allen told Rehab 4 Addiction: “It appears that while so-called cool teens’ behaviour might have been linked to early popularity, over time, these teens needed more and more extreme behaviours to try to appear cool, at least to a subgroup of other teens.

“So they became involved in more serious criminal behaviour and alcohol and drug use as adolescence progressed. These previously cool teens appeared less competent — socially and otherwise — than their less cool peers by the time they reached young adulthood.

“The adolescent who comes to depend upon pseudo mature behaviour to gain peer status may gradually need to shift, for example, from minor forms of delinquency, such as vandalism and shoplifting, to more serious acts of criminal behaviour to impress even a subset of older peers” concluded Professor Allen.

Reasons for this fall in popularity are many. The study claims these former ‘cool kids’ lack the social skills needed to form long-term and meaningful relationships in adulthood and instead focus their time and energy on ‘debauchery’ and ‘superficial behaviours’.

Rehab 4 Addiction is a UK-based alcohol addiction helpline run by Oliver Clarke. Oliver is a recovered addict. He’s now devoted his career to helping those affected by addiction.

Table of Contents
1. What the study tells us
2. Pseudomature behaviours
3. What is cool at 13 thankfully isn’t cool at 23
4. Resorting to extreme measures to win back approval
5. About Rehab 4 Addiction