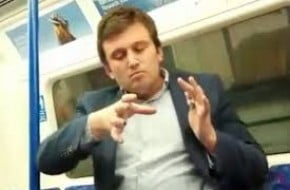 Yesterday a video emerged of a City banker snorting cocaine whilst traveling on the London Underground.

A fellow passenger caught the shenanigans on his phone’s camera.

Unfortunately for the banker the footage was later sold to The Sun newspaper.

You can watch the entire video below:

Cocaine is a Class A prohibited drug under the Misuse of Drugs Act 1971. Those caught in possession of a Class A drug could face up to seven years imprisonment and/or an unlimited fine.

The unknown man snorted the cocaine in front of other passengers, including children.

In the video the man claims to work for Data Room Provider, a network provider in the financial sector.

The man then asks a fellow passenger if he would like to snort some cocaine.

The film took place at around 11pm on Friday 5th June. A witness at the scene told Rehab 4 Addiction: “He didn’t seem to care that everyone was watching him. It was just so open”.

The Sun article interesting reveals many of society’s ingrained attitudes towards drug use.

Not once does the article refer to addiction as a disease. The article describes the man as a monster, rather than a sick man in need of treatment. As a rich City banker this man is likely able to afford rehab.

Unfortunately many addicts living in the United Kingdom are not so lucky. Perhaps the Sun would make more of difference by discussing the lack of funding made available to those who suffer from addiction.

London undoubtedly does suffer from a cocaine epidemic. A recent study conducted by the European Monitoring Centre revealed London sewers have the highest concentration of cocaine than any other city in Europe, ahead of both Amsterdam and Madrid.