A Guide To Anorexia & Fertility

If you and your partner are trying to become pregnant, it can be utterly crushing to find out that you can’t conceive. You probably feel grief or anger over your situation.

Overall, it’s just not a happy situation for anyone to be in. But you are not alone. About a tenth of the population struggles with infertility.

And anorexia is the mental illness, or cognitive disorder, with the highest mortality rate.

But if you or a loved one suffers from anorexia, and you’re unable to become pregnant, there are options and methods to consider.

This guide aims to assist you or a loved one in understanding the relationship between anorexia and infertility.

Anorexia nervosa is an eating disorder in which the person ceases eating and loses excessive weight -15% less than the average body weight of their body type.

Malnutrition is a common occurrence as is a ceasing of the menstruation cycle if the patient is a woman.

This constitutes an illness as it is a disordered way of thinking, and makes the individual believe they are overweight or obese when in fact their body weight is so low that it’s unhealthy.

Anorexia tends to affect females more than males and dancers, actors, and models have a greater risk of developing anorexia or another eating disorder.

Infertility is an inability to conceive a child. Generally, a couple is deemed infertile if they have been trying and failing to become pregnant for a year.

Both women and men can be deemed infertile since several factors affect whether a woman becomes pregnant such as:

While infertility is commonly considered solely a problem on the women’s end, only about 1/3 of infertility cases are because of the woman’s inability to become pregnant.

1/3 of infertility cases involve men, and the last 1/3 are made up of either a combination of both the man and woman being unable to conceive or a cause that can’t be pinpointed by the doctor.

How does anorexia affect infertility?

What is Amenorrhea and ‘famine mode’?

In short, Amenorrhea is a fancy way of saying a woman’s period has stopped completely. This generally happens in women who suffer from anorexia, especially if they engage in a lot of strenuous exercises or if she restricts her food intake to a dangerously low level.

Starvation or famine mode is when your body slows down its metabolism as a response to a decrease in the daily calories consumed-especially if the decrease causes daily caloric intake to drop below the required daily calories for the body to function properly.

People in famine mode usually do continue to lose weight, especially if they’re consuming little to no food, but will generally begin to lose weight at a slower rate than they were previously.

While the exact number of people suffering from anorexia is unknown, there are an estimated 4 million people who are anorexic that haven’t sought treatment.

Here are a few facts and figures to illustrate how prevalent and damaging anorexia really is:

If you manage to become pregnant while you’re anorexic, your pregnancy will most likely be at a much higher risk of running into complications.

Not only is the baby at risk, but the mother is as well.

A pregnant woman who suffers from anorexia will most likely deal with health problems such as depression, malnutrition, heart problems, and premature labour.

The risks to the baby include problems breathing and eating, and low birth weight, and even a stillbirth can occur.

Anorexia during the postnatal period

Because pregnancy causes significant weight gain, some women with anorexia begin to relapse into stricter dieting habits while some women seemed to overcome their anorexia.

There have been few studies done on the evolution of anorexia in post-partum women since few women are able to become pregnant. Because of this, there is little consensus over whether giving birth makes the anorexic feelings worse, or lessen them. 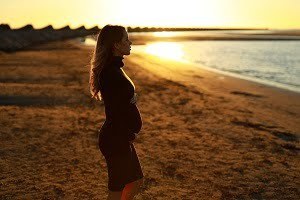 If you want to have a child, here are a few recommendations to make sure you and your child are both healthy during and after the pregnancy:

It’s important to maintain healthy body weight and attend counselling to help work out the causes of your eating disorder.

If you become pregnant, and you’re malnourished or under your ideal weight, that poses a serious risk to both you and the child you’re expecting.

Coping during pregnancy with an eating disorder

If you become pregnant while you’re struggling with an eating disorder, the most important thing you should do is inform your prenatal health provider.

Try to find someone who is sympathetic to what you’re going through as they will best help you work out your feelings and give you sound advice to keep both yourself and your baby healthy.

You may also need to consider making extra appointments with your prenatal health provider to better track the growth and development of your baby.

Most importantly, you need to allow your health provider to weigh you. This information is essential to tracking the health of you and your baby.

Because a woman’s period may become infrequent or stop completely, she may come to believe that she is unable to conceive a child.

While it is definitely a little more difficult to become pregnant, women with eating disorders should still take adequate measures to take birth control and practise safe sex to prevent any unplanned pregnancies.

Women with eating disorders also have complicated feelings associated with childbirth and pregnancy. As such, they will often need extra support before, during, and after pregnancy.

Table of Contents
1. Understanding anorexia
2. What is infertility?
3. How does anorexia affect infertility?
4. What is Amenorrhea and ‘famine mode’?
5. Anorexia: the statistics
6. Complications during pregnancy
7. Anorexia during the postnatal period
8. Reproduction recommendations
9. Coping during pregnancy with an eating disorder
10. Unplanned pregnancies among women with eating disorders