The Dangers of Synthetic Cannabinoids 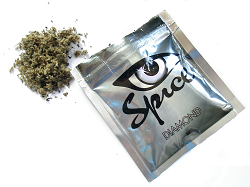 Synthetic cannabinoids are solids or oils which can be added to dried herbs, vegetable matter or plant cuttings. Essentially, they are chemicals designed in a laboratory which gained their name because their use and effects are comparable to those of cannabis, a drug made from a naturally occurring plant.

Synthetic cannabinoids are most commonly ingested via smoking, either by mixing them with tobacco and rolling them into a ‘joint’ or ‘spliff’ or by using a pipe called a ‘bong’.

In some cases, synthetic cannabinoids are prepared as a herbal infusion and are consumed by drinking. Synthetic cannabinoids cannot be packaged and sold legally in the UK since the passing of the Psychoactive Substances Act 2018. However, these drugs are still relatively easy to acquire illegally.

What are the effects of synthetic cannabinoids?

Synthetic cannabinoids are thought to act on the same receptors in the brain as tetrahydrocannabinol (THC), the main psychoactive chemical found in cannabis. The reported effects are therefore similar to cannabis but are widely varied; from feeling relaxed, giggly, extremely hungry and talkative to being drowsy, paranoid, forgetful or hallucinating.

What are the dangers of synthetic cannabinoids?

Although in the UK some forms of the drug are classed as legal, the dangers associated with synthetic cannabinoid use are numerous. As with cannabis, regular use can increase the later risk of developing psychotic illnesses such as schizophrenia.

There may be physical side effects after use such as increased heart rate, restlessness, nausea, vomiting and drowsiness as well as psychological consequences like panic attacks and hallucinations.

The synthetic compounds may bind more strongly to receptors in the brain than natural cannabis, leading to a more powerful and prolonged effect. With repeated use, there may be a risk of both physical and psychological addiction.

Getting caught with illegal synthetic cannabinoids can lead to a police caution, an unlimited fine, or years in jail. Driving under the influence of drugs can also lead to fines, disqualification from driving, or prison.

The strength and makeup of the compounds are changing constantly so you cannot be sure exactly what you are buying, making the potential health or social impacts dangerous and unpredictable.

How will I know if someone has a synthetic cannabinoids problem?

If someone has a serious problem they may experience withdrawal symptoms when they go without synthetic cannabinoids. The reported withdrawal symptoms include irritability, change in mood, decrease in appetite, weight loss, difficulty sleeping, shaking, sweating and diarrhoea which are important signs to look out for.

However, it may be possible to spot someone becoming dependent before they reach this point. Look out for a need to use the drug regularly; failed attempts to stop using; or engaging in activities which appear out of character, like stealing in association with the drug use.

It is common for people to be in denial or not realise the extent of their problem, so noticing these changes in behaviour and reaching out to them can be key.

If you think you or someone you know may have a problem with synthetic cannabinoids, contact us for help and support. Rehab 4 Addiction is staffed by professional addiction counsellors, nurses and doctors who can provide a confidential telephone assessment and offer information on a variety of treatment options tailored to your needs.

We are available every day of the week on 0800 140 4690. We know that the road to recovery can be daunting but we hope that seeking assistance from Rehab 4 Addiction will be the first important step on your way.