The Risks of Taking Ibuprofen & Alcohol 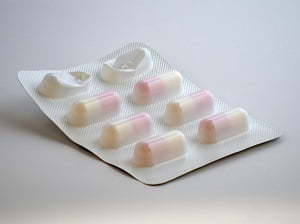 Ibuprofen is a medication for relieving pain, fever, and swelling (a nonsteroidal anti-inflammatory drug or NSAID). The medication is sold over the counter under several brand names like Motrin, Midol, and Advil. But mixing ibuprofen and alcohol is a dangerous game.

While a prescription isn’t needed for over the counter drugs like ibuprofen, the drug is still strong with serious side effects when misused. This can include overdosing on anti-inflammatories or combining them with other medications or substances such as alcohol.

In this post, we will discuss the reasons why combining alcohol & ibuprofen is dangerous.

Is it safe to drink alcohol and take ibuprofen?

According to the NHS, it is safe to take pain relievers when drinking small amounts of alcohol. [1] However, there are risks of experiencing mild to serious side effects from taking ibuprofen regularly alongside moderate amounts of alcohol (a drink for women and two drinks for men). [2]

Ibuprofen is a pain reducer. The medication also reduces inflammation. However, ibuprofen can irritate the stomach lining resulting in ulcers and bleeding. Alcohol does the same thing on its own.

When the two are mixed together, the risk of ulcers and bleeding is compounded. Ibuprofen can also alter blood clotting (make it harder or easier to clot/bleed). The medication can also be toxic to organs like the kidneys and liver.

What are the dangers of drinking and taking ibuprofen?

Drinking alcohol while taking ibuprofen can cause:

Ibuprofen, among other NSAIDs, is known to irritate the digestive system and increase the risk of getting ulcers.

This is precisely why they are supposed to be taken after eating. Ibuprofen can cause perforation in the stomach/intestines or gastrointestinal bleeding.

These symptoms can be abrupt without warning signs resulting in sudden death if the bleeding or perforation isn’t detected and treated immediately.

Studies have linked long term ibuprofen use to kidney damage. [3] Kidneys filter toxins in the body. Alcohol, which is also a toxin makes it hard for the kidneys to do their job.

Consuming alcohol alongside ibuprofen increases the risk of kidney damage, given both exert a lot of stress on the kidneys.

Common signs of kidney damage include shortness of breath, tiredness, and swelling in the feet, hands, and ankles.

There is a link between NSAIDs and cardiovascular problems like heart attack and stroke. [4] People who take NSAIDs apart from aspirin increase their risk of suffering from stroke or heart attack when compared to those who don't take NSAIDs.

The risk increases further for individuals who have taken NSAIDs for a long time. Cardiovascular problems or stroke can also be sudden and fatal, as is the case with gastrointestinal bleeding.

Individuals who take ibuprofen alongside alcohol and start experiencing chest pain, slurred speech, shortness of breath, or weakness in one side of their body should seek emergency medical care immediately.

Ibuprofen can also cause drowsiness, decreased alertness, among other cognitive problems. Alcohol has the same effects. Mixing alcohol and ibuprofen makes these symptoms worse, making driving or operating other machinery exceedingly dangerous.

Habitual long-term use of ibuprofen alongside alcohol can heighten the body's sensitivity to both alcohol and ibuprofen. It can also increase physical dependency to alcohol, increase addiction, and overdose risk.

How to take ibuprofen safely

Ibuprofen is safest when taken for a short period. Doctors should offer other alternatives for safe long-term pain management. Individuals taking ibuprofen should stick to the recommended dosage.

Also, ibuprofen shouldn’t be taken to relieve a hangover since alcohol is usually present in the system of a person with a hangover. The stomach also tends to be more vulnerable at this time, increasing the risks of ulcers and gastrointestinal bleeding.

It also helps to drink in moderation. The CDC defines moderate drinking as a drink and two drinks for women and men, respectively. The CDC also defines what one drink means in regards to the type of alcohol and alcohol percentage per drink. [5]

Signs you need to see a doctor

If you take ibuprofen and experience any of the following symptoms, you should see a doctor immediately.

Individuals who consume alcohol on a daily basis and have problems quitting should seek medical attention.

The risk in older adults

According to the NIAAA, risks associated with mixing alcohol and medication increase with age. Older individuals have a harder time breaking down alcohol. They are also more likely to be on medication, which compounds the risks.

The absorption rate and efficiency of alcohol and medications in the bodies of older adults are also inhibited. This is due to metabolic slowdown, where an enzyme called alcohol dehydrogenase (ADH) is at lower levels than in the stomachs of younger people.

Aging also adapts chemicals in the brain and body, including those responsible for alertness and energy. Older people are more prone to feeling more sedated by certain medications which, when combined with alcohol, pose a variety of health risks.

How long after drinking alcohol can I take ibuprofen?

Alcohol stays in the system for 1 to 3 hours. However, a urine test and breathalysers can detect alcohol taken 24 hours ago. Hair test can detect if you have taken alcohol in the past three months.

There are several factors that dictate how long alcohol will take in your system. For instance, individuals who are addicts eliminate alcohol faster from their bodies. The amount of time it takes for alcohol to leave your body will also increase as you drink more. A standard drink (12 ounces of a typical beer) will increase the blood alcohol level to 0.02 – 0.03.

A person’s body size will also dictate how long alcohol stays in their system. Ideally, you should allow at least a day before you take ibuprofen. If you have taken a lot of alcohol, allow more time (two days or more).

Which pain reliever can you take with alcohol?

While taking nonsteroidal anti-inflammatory drugs (NSAIDs) and drinking alcohol can help reduce inflammation in the body, be careful of the dosage. Excessive consumption of both alcohol and NSAIDs (aspirin, indomethacin, mefenamic acid, and celecoxib) can result in bleeding of the stomach.

Taking Tylenol while drunk or hungover can also cause liver damage as its components restrict the body’s ability to process alcohol. While it’s safe to take low doses of naproxen, acetaminophen, and ibuprofen with small amounts of alcohol, it’s not advisable to do so give the long-term consequences of this turning into a habit.

In conclusion, pharmacists claim that in a ‘perfect world’, mixing over-the-counter painkillers with alcohol should be avoided. If you are taking any pain medications to relieve a hangover, you should look into your drinking habits instead.

1. Is it safe to drink alcohol and take ibuprofen?
2. What are the dangers of drinking and taking ibuprofen?
3. How to take ibuprofen safely
4. Signs you need to see a doctor
5. The risk in older adults
6. How long after drinking alcohol can I take ibuprofen?
7. Which pain reliever can you take with alcohol?
8. References