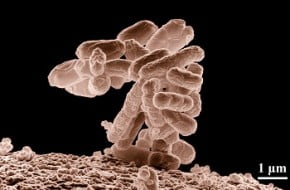 Research conducted at the University of California, San Diego reveals that drinking alcohol allows toxic ‘gut bacteria’ to leak into the bloodstream.

Once in the blood stream, this toxic gut bacteria is filtered into the liver.

Whilst in the liver, this bacteria causes all manner of harm, including cirrhosis (scarring of the liver) and even hepatitis.

Lower levels of REG3G lectins means intestinal bacteria is not kept in check.

This boost in intestinal bacteria means more of this bacteria is able to escape into the blood and then damage the liver.

Alcohol itself also harms the liver by decreasing the levels of antimicrobials.

This increases the risk of alcohol-induced liver disease.

The study says: “Alcohol appears to impair the body’s ability to keep microbes in check.”

One of the researchers, Dr Schabl, said: “When those barriers break down, bacteria that don’t normally colonize in the liver end up there, and now we’ve found that this bacterial migration promotes alcohol liver disease.”

“Strategies to restore the body’s defences might help us treat the disease.”

The study involved animal studies conducted on mice over an eight week period.

Autopsies were then carried out on mice.

Mice exposed to alcohol revealed a reduction in the antibiotic REG3G lectins in the gut.

This reduction in REG3G lectins meant affected mice were more prone to bacterial ‘migration’ from the gut to the liver.

A reduction in REG3G was directly linked to an increase in alcohol-related liver disease.

Contrary, another group of mice were given drugs to strengthen REG3G. This increase in REG3G was linked to a decrease in the occurrence of alcohol-related liver damage.

The researchers say this research could pave the way for new treatments that could prevent the occurrence of alcohol-related liver disease.

Drugs designed to boost REG3G in humans are likely to be developed in the near future. These drugs could be effective at reversing alcohol-related liver disease.

In 2014, a shocking 4,452 people died due to alcohol-related liver disease, so new treatments are universally welcomed.