Does Smoking Make it Harder to Stop Drinking? 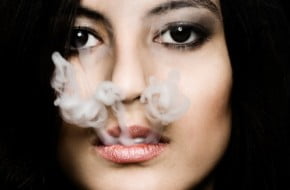 Many believe smoking affords alcoholics an ‘unfair’ advantage in detox compare to those who do not smoke. This is because smoking is commonly thought to ‘smooth’ discomforting withdrawal symptoms. However a recent study titled ‘Tobacco Smoking Interference with GABA-A Receptor Neuroadaptions During Prolonged Alcohol Withdrawal’ reveals this belief is utterly unfounded.

The study, conducted by Prof. Kelly Cosgrove of Yale University in ‘Proceedings of the National Academy of Science’ at an alcohol rehab centre, reveals cravings during alcohol withdrawal are twice as potent for addicts who do smoke compared to addicts who do not smoke.

The science of cravings

Alcohol abuse increases the activity of a hormone known as GABA-A. GABA-A is a receptor located in the brain. GABA-A naturally slows down the body’s central nervous system in times of stress. Both alcohol and tobacco exploit this process by increasing GABA-A activity. Increased GABA-A activity is a key cause of withdrawal symptoms.

When alcoholics enter detox, GABA-A activity must return to normal levels for alcohol cravings to cease. The study proves tobacco consumption interferes with the recovery of GABA-A receptors in the brain during detox. Because of this alcoholics who smoke must wait much longer for cravings to subside during rehabilitation.

How the study was conducted

Prof. Cosgrove took a group of alcoholics and initiated a detox. Half of the group smoked and the other half did not smoke. A second ‘control’ group consisted of non-alcoholics/non-smokers. Prof. Crosgrove and her team measured GABA-A receptor activity for every participant in the study using PET scan technology. During detox, subsequent PET scans revealed GABA-A activity for alcoholics who did not smoke returned to the same levels of the non-alcoholic ‘control group’ twice as fast when compared to alcoholics who did smoke.

This prolonged GABA-A recovery period meant the smokers suffered alcohol cravings twice as powerful as those alcoholics who did not smoke.

Prof. Cosgrove told Rehab 4 Addiction: “Continued smoking during withdrawal interfered with the subsequent normalization of the GABA-A receptors and was associated with higher levels of craving, which may increase relapse risk.”

“We found that in people who smoked cigarettes during withdrawal, their brains didn’t have the same recovery as the alcohol-dependent people who did not smoke, which suggests that smoking is interfering with the recovery of the brain.”

A mysterious chemical in tobacco

Interesting Prof. Cosgrove believed nicotine was the active substance in tobacco to blame. To test this hypothesis Prof Crosgrove carried out a second experiment involving monkeys. The monkeys were given alcohol to increase GABA-A activity in the brain. Half of the monkeys were given nicotine patches. When Prof. Cosgrove detoxed the monkeys, nicotine was found to have any effect on GABA-A recovery. Therefore the study concludes another unknown chemical contained within tobacco must be the cause of smoker’s plight.