Eating Seafood May Reduce the Occurrence of Depression 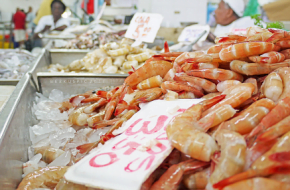 A new study published in the Journal of Epidemiology & Community Health reveals people who regularly eat seafood are much less likely to suffer from depression. The study analysed information from twenty-six other studies involving 150,278 people conducted between 2001 and 2014.

However, scientists say considerable more research is required to determine exactly why eating seafood reduces the risk of suffering from depression.

Depression is thought to affect around 350 million people worldwide. This is around 6% of the World’s total population. The World Health Organisation says depression is on the rise and by 2020 it is set to be the World’s second most common mental illness.

Many researchers believe getting a healthy nutritious diet is an essential long-term strategy for defeating depression. This includes eating fish, vegetables, whole grains and fruit and staying away from processed foods.

“Furthermore, a meta-analysis published recently indicated that a healthy dietary pattern, characterised by a high intake of fruits, vegetables, fish and whole grains, was significantly associated with a reduced risk of depression.

“However, it is not yet clear which component of the dietary pattern would be responsible for the protective effect.”

Implications of the study

Clearly more research is needed, particularly to determine which seafood types may be most beneficial in the prevention of depression.

The precise biological pathways involved are also not understood. Currently, scientists hypothesise that omega-3 oil alters the neurotransmitters dopamine and serotonin, although this hypothesis is not yet proven to be true.

Fish intake may also be incidental to an overall healthier lifestyle, something that may not be limited to diet alone.