Europe Has Highest and Lowest Level of Alcohol Mortality 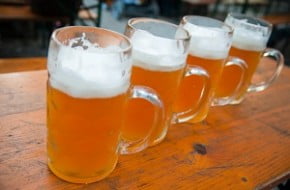 A new study published by researchers in the Netherlands reveals Europe has the highest and lowest levels of alcohol mortality in the World. This disparity is thought to be due to social and economic differences between the populations of various European Member States.

The study was conducted by researchers at the Erasmus University Medical Center in Rotterdam, the Netherlands. Researchers analysed data concerning alcohol-related deaths in 17 European countries. Causes of death varied from cirrhosis of the liver, alcohol abuse and cardiomyopathy, amongst others.

The data included details on the occupational class and educational level of those who died from an alcohol-related illness.

Researchers also analysed cause-of-death data contained in the literature reviews. This data also contained information on the deceased’s’ occupation and level of education.

Where was the highest level of alcohol-related mortality?

Researchers also point out cultural differences between northern and southern Europe. For instance, people living around the Mediterranean restrict their drinking to meal times, whilst binge drinking is more common in northern and eastern European countries.