Risk of Alcohol Death Linked to Where you Live

Home  /  Blog  /  Risk of Alcohol Death Linked to Where you Live


Office of National Statistics (ONS) figures published in February 2016 reveal that alcohol-related deaths have increased in the UK during 2014 for the first time since 2008.

The ONS report reveals there were 8,697 registered alcohol-related deaths in 2014.

Over 65% of these deaths were male.

Perhaps more alarming is the risk of dying from alcohol abuse is linked to where you live.

Broadly, Scotland had the greatest number of alcohol-related deaths in 2014.

Therefore, women living in the north were more than twice as likely to die from alcoholism compared to their peers living in the south of England during 2014.

Age was also a factor. The highest mortality rate for alcohol-related deaths was amongst 55 to 64-year-olds.

A crisis in Yorkshire and the Humber

Over the last two decades, Yorkshire and The Humber have seen the greatest increase in alcohol-related deaths.

This represents a 135 per cent increase in just twenty years.

The below reveals rates of alcohol-related deaths for males by region in England for 2014: 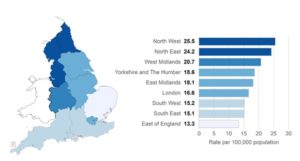 Above: The North West of England experienced the greatest number of alcohol-related deaths, followed by the North East.

The below reveals rates of alcohol-related deaths for females by region in England for 2014:

Are you affected by alcoholism in the north of England? Rehab 4 Addiction offers recovery services in northern England and Scotland. This includes Edinburgh, Edinburgh, Leeds, Yorkshire, Manchester and Liverpool.

Table of Contents
1. A crisis in Yorkshire and the Humber
2. Regional differences