With the popularity of alcohol throughout our society, it can be easy to forget how dangerous it can be when used incorrectly. The majority of people will responsibly consume alcohol; however, it can become a problem that has gotten away from us in short order.

Alcohol abuse can lead to a variety of life-threatening complications, and addiction to it is a serious medical condition. When consumed in excess, it can even lead to poisoning due to the body’s inability to filter such large amounts of toxins efficiently.

What is Alcohol Poisoning?

On the surface, alcohol poisoning is a result of the ingestion of too much alcohol in too short a period. Unfortunately, as one begins to examine this condition it becomes clear that there are far too many variables for it to be presented in such a cut and dry manner.

When a person consumes alcohol, their blood alcohol content, or BAC, will increase. As the BAC increases, an individual will begin to experience increased symptoms of impairment. The impairment experienced by an individual who has consumed alcohol is due to the inhibition of the interactions that the brain has with the different systems within the body.

The brain becomes unable to properly control how the body is breathing, regulate the body temperature, and will even begin to lose control over the heart rate. If an individual who is experiencing alcohol poisoning does not receive proper treatment, the condition can be fatal, or result in permanent injury.

The rating most people will be familiar with when it comes to alcohol will be the legal limit for driving. Each country sets its regulations regarding the legal limits to operate a motor vehicle. In the U.K., except Scotland, the legal limits are defined as follows:

In Scotland, the legal limits are even lower. Each person will have to take into account their size, gender, how much they’ve eaten, and what type of alcohol they are consuming to determine whether or not they have reached that limit.

While this limit is useful for policing impaired driving, it is not particularly useful to a person who is out for a night of drinking. While at a pub, it is not easy to determine at what concentration the alcohol has accumulated in your blood.

You will also be unable to feel the effects of the alcohol that you consume immediately, and your BAC can continue to rise for a time after your last drink due to the absorption of the alcohol still in your digestive system.

What is a Unit of Alcohol?

Since it is very difficult to measure the impact of a drink from one individual to the next, the measurement of a unit of alcohol was developed to give those consuming alcohol a guideline to determine their level of intoxication.

Before we can calculate the number of units of alcohol in a drink, it important that we understand how alcohol by volume or ABV is calculated. This is the amount of pure alcohol found in the total volume of liquid. This amount is represented as a percentage of total volume.

To calculate the number of units in an alcoholic beverage, you take the ABV and multiply that by the volume of the drink in millilitres. Then you divide the result by 1000, and you are left with the units of alcohol in the drink.

How Does Alcohol Poisoning Develop?

How your body metabolises alcohol will play yet another role in determining the point at which you become impaired or enter the dangerous territory of alcohol poisoning. Different people have metabolisms that run at different rates.

As you can see, there are too many variables to consider when you are trying to determine if a person has consumed too much alcohol. As a result, when you are assessing a person to see if they are experiencing symptoms of alcohol poisoning, you’re going to want to check for a variety of symptoms. 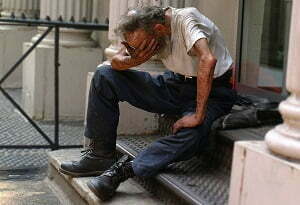 What are the Symptoms of Alcohol Poisoning?

The following list of symptoms should be used as a guide to determine if you or someone that you are with are showing signs of alcohol poisoning:

In severe cases, alcohol poisoning can result in brain damage or can even become fatal. If you believe someone is suffering from alcohol poisoning, make sure that you call 999 or emergency assistance as soon as possible.

How Common is Alcohol Poisoning?

Alcohol poisoning is far more prevalent than most people suspect. In fact, during the 2018/2019 reporting period, the NHS reported that there were approximately 358,000 admissions to hospital as a result of alcohol consumption. There were 5,698 deaths in 2018 that were specifically attributed to alcohol. Alcohol poisoning is most commonly a result of binge drinking.

One may expect that alcohol poisoning was mostly an issue for young people and would expect that the age-group most affected by this condition would be in the twenty to forty age group. Data points to the age group between fifty-five and sixty-five as being the highest risk group in both men and women.

Alcohol poisoning is prevalent throughout our communities, and it can strike anyone, at any age. Those who are struggling with an addiction to alcohol, or find they have difficulty cutting back should know that they can seek help.

How Much Alcohol Does it Take to Cause Alcohol Poisoning?

As discussed above, this will vary from person to person. There are some general guidelines that can be followed however to make an educated guess as to your risk of developing alcohol poisoning.

How Can I Tell the Difference Between a Hangover and Alcohol Poisoning?

A hangover in and of itself can feel as though your body is on the edge of death. Know that hangovers will pass, and they generally do not represent a medical emergency. However, if the individual suffering from a hangover is exhibiting the signs of alcohol poisoning, especially a blueish hue, or they are unresponsive, you must seek medical assistance for them as they are experiencing alcohol poisoning.

As long as you are responsive, able to keep fluids and food in your stomach, are not confused, and your breathing is steady, it is most likely that you are experiencing the effects of a hangover, and it will not lead to lasting damage.

How is Alcohol Poisoning Diagnosed?

Alcohol poisoning will usually be suspected by first responders based on the situation that they first encounter a patient in, and what is relayed to them by family and friends. However actual diagnosis is made through blood or urine tests once the patient has reached the hospital or emergency facility.

Which Factors Increase the Risk of Alcohol Poisoning?

There are a variety of conditions that may result in alcohol poisoning occurring faster than it otherwise normally would. These include:

How Long does it Take for Alcohol to Get Out of your System?

This means that if you consume five units of alcohol within an hour, in general, a healthy liver will remove that alcohol within the next five hours. However, individual metabolisms and the health of your liver will determine how closely that approximation matches reality.

As heavy drinking is known to cause liver damage, if an individual has long been a heavy drinker, it may take longer for the alcohol to be removed from the blood.

What are the Dangers of Alcohol Poisoning?

Those suffering from alcohol poisoning face several risks. According to the NHS, these include:

When Should I Seek Help?

If you are alone, and you believe that you may be suffering from alcohol poisoning, you should dial 999 or your local emergency number immediately. You may lose consciousness and no longer be able to ask for help.

If you are with someone that you believe may be suffering from alcohol poisoning, use the symptoms provided above as a guideline. If these symptoms are present, especially symptoms such as the bluish hue to the individual’s skin, or erratic breathing, you should request medical assistance immediately.

How is Alcohol Poisoning Treated in the Hospital?

Depending on the severity of alcohol poisoning, the NHS indicates that some or all the following treatments will be conducted in hospital:

How Can I Help Someone Who is Suffering from Alcohol Poisoning?

After you have reached out to emergency services, you should do the following to help the individual until help arrives:

What Shouldn’t I Do for Someone Suffering from Alcohol Poisoning?

It is quite likely that an individual in the throws of alcohol poisoning may become drowsy, and they may believe it’s time to just let them sleep it off.

No matter how bad they may wish you don’t, it’s imperative that you contact emergency services, and wait with them until help arrives. While they may be fine, it is never worth the risks if the symptoms of alcohol poisoning are present.

What Should I Do After I have Alcohol Poisoning?

If this was a one-off situation, there may be nothing left for you to do unless you suffered long-term damage. However, if this isn’t the first time this has happened, you may want to consider whether or alcohol has become an issue for you in your life.

If you need help, you’re not alone. There are many resources out there to help you overcome the problem. Visit our alcohol addiction page to find out more.